The Hammer & Anvil Blog is the personal blog of Sebastian E. Ronin, President, National Synergist Party of North America. The opinions expressed herein may or may not reflect the theory, ideology, constitutional foundation, and policies of the NSPNA. Collapse is both tomb and womb. Green and White unite. Win first, fight later.

Archive for the category “The Unpopular Truth: Informers”

Once again, the futile attempt at character assassination against me has raised its silly head. In total, there are now three such accusations floating around in cyberspace falsely claiming that I am an “informer” here, here, and here. The accusation is a bald-faced lie.

To the best of our understanding, these efforts are being generated by one Chris Blanc who goes under the Internet aliases of “Brett Stevens” and “Prozac” and is affiliated with some “organization” called “ANUS.” He usually posts from the Amerika blog where he scribbles much yet manages to say little. For this “Informer” nonsense he has created The Unpopular Truth blog (see links below).

Mr. Blanc has been known to present himself with a Unibomber avatar.

He has also been known to present himself as a shining hamburger Adonis. 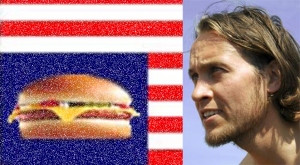 He is, of course, neither. Based on a photo that has been supplied to me with the assurance that it is in fact a picture of Mr. Blanc (wearing the shades), it is evident that he is merely a pudgy and greasy pothead. This is quite an accomplishment for a 40-year old “man.” Cough.

Why Mr. Blanc insists on these fruitless attacks is beyond me. My best guess is that, as a genuine Amerikan conservative patriotard, he is terribly butthurt by my attacks on Amerika for the spiritual and cultural shithole that it is. That’s life. It is also an ideological stance in the literary company of Francis Parker Yockey and Michael O’Meara.

The one “witness” that Mr. Blanc has pulled into his smear campaign we have been informed is one Paul Edward “The Ginger” Clayton. Master Clayton is a neurotic adolescent who was told to take a hike from RPN circles about a year ago. These types of basement masturbators tend to actually believe that their anonymous, “warrior” posturing in cyberspace is real.

The supposed “evidence” that Mr. Blanc is in possession of, i.e. mingling with a “Leftist” web site, has never been made public to repeated inquiries from proxy affiliates of mine, who are tapped into his network, that he do so. The claim by Master Ginger that I called his home and university, berated his parents, etc. is simply a lie. Who does this neurotic little shit think he is? The RPN is not a “Rightist” party. It is public knowledge that we have staked the high ground of the Third Positionist Centre. Who cares if Murkan patriotards are butthurt?

For the record, no, I am not an informer. Furthermore, relative to numerous other idiotic attempts at character assassination that have come my way over three years, neither am I a Jew, a homosexual, a paedophile, a welfare bum, anti-White (though I am anti-stupid White), the anti-Christ (okay, given Heathen leanings, just a little bit), drunken tramp, or scruffy hobo, these last two gems having been tossed most recently by the National Anarchist crooner-in-chief, Troy Southgate. I am a White Euro Prepper and secessionist. I have worked, conducted business, made some poor and a few very good investments in my life. I do not live in a shack; my rural two acres with 2,000 s.f. Century farmhouse is paid for. I own my politics with my conduct.

So much for what I am not. Juxtaposed against Mr. Blanc’s and co.’s false accusations, is the fact that I function in the real world with my real name. Given the nationalist nature of Mr. Blanc’s accusations: 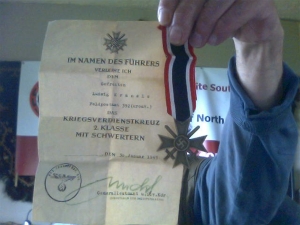 Mr. Blanc’s claim that I am under investigation by the FBI due to supportive statements made on behalf of Anders Breivik may contain a morsel of truth, but I doubt very much that he would be aware of this. I did receive visits from CSIS and the RCMP during November, 2011 in light of a blog post published, a posted YouTube video, and an edited snip from the video that was broadcast on Norwegian public television (see at 38:50). They profiled me, I profiled them. This was all while Amerikan conservatives and White Nationalists were still pissing themselves over their usual, retarded ideological and political analyses over the events carried out in Oslo and on  Utoya Island. Drawing attention from the authorities is what happens when a possible legitimate political threat in the real world is perceived by the state: the state takes precationary notice, derp, something that our resident basement masturbator and National Anarchist crooner need not concern themselves with. That the RPN is carefully courting the Kanadian military and police agencies with our Policy Positions is public knowledge. So shoot us for actually knowing how to go about pursuing power 20 years down the road as opposed to posting anonymous and moist twaddle.

Lastly, that Mr. Blanc, given his known pro-Israel sentiment in nationalist circles, has directly associated himself and his commentary with Murkan White Nationalism and Brit National Anarchism is a bonus and a feather in the RPN’s Ethno Nationalist hat. Hey, I’ll take that action any day of the week! The number and stupidity of Murkan “nationalist” Eveready Bunnies (The gift that keeps on giving.) just seem to keep on multiplying. Like bunnies.

With cyberspace enemies (cough) like Mr. Blanc, who needs friends? Honour and integrity are grand words, but in the ethnic-empty swamp of Murka are much too often betrayed by the spiritual and cultural conditioning of the Inner Jew. Zionist Occupied Soul beez a bitch.

Thank you, Mr. Blanc. Good doggie! Enjoy your new asshole. It has been my pleasure ripping it. Now fuck off.